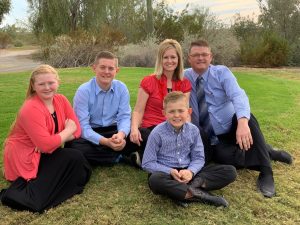 Pastor Tom and Lara McConkey were married on June 15, 2002. They have three children: TJ, Harmony, and Justus. The McConkey’s are thankful for the opportunities the Lord has put in their paths for ministry. After several years of service to the Lord in Mesa, Arizona,  God led Tom to pastor a church in Maryland.  God then brought the McConkey’s back to Arizona.  The McConkeys rolled up their sleeves and began to diligently help in a new church plant. God worked and in His timing, Tom became the pastor of Liberty Baptist. It is their privilege to be a part of the planting and watering process, while God gives the increase. (1 Corinthians 3:6-9)